“if the skin were parchment and the blows you gave were ink”.
Shakespeare’s Comedy of Errors

Video of Process and Practice can be viewed
@
https://vimeo.com/27002200
Extraction of Text from
Mark Greenwood's writing below. 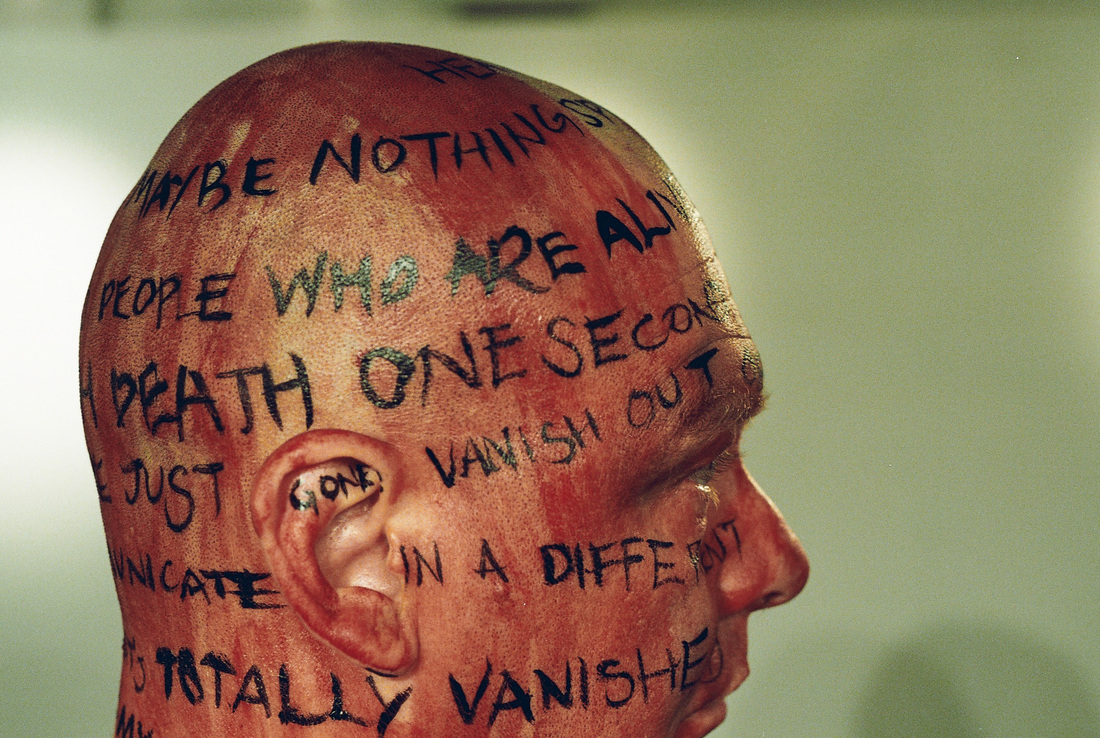 In 'Rituals of Being Not Being' (2007) where Michael travelled to Galway as an artist in residence.
The collecting of stories, from fourteen people over ten-days, culminated in a series of performance and
writing actions.
In Rituals, Michael tests ideas around performative acts and sustained utterance, while also pursuing notions of self-erasure through a variety of rituals and practices.
The collation of stories becomes a performative act, established through truth, trust and communication; where relative
strangers offer stories of people or things that have disappeared in their lives. These private memories
constitute ideas around loss and how we react to the trauma of sudden and unexpected absence. In a
durational process of disappearance Mayhew attempts to archive human experience through the
processing of text into action. While Mayhew nods to ideas of referentiality, framing and notions of
performance as an extended field beyond sculpture and painting, his concerns question subjection and
the body as material. His head swings from side to side, hair flails from left to right, the hair is cut and
the head shaved until glabrous and sore. Blood is given and texts are painted on the body, stories wrap
themselves round the neck and chest, like tribal adornments or ritual scarifications that re-constitute
the skin as a writing surface. These ideas around economies of inscription and the body emerge in
relation to Michel de Certeau’s writings on everyday life;

There is no law that is not inscribed on bodies. Every law has a hold on the body. The very idea of an
individual that can be isolated from the group was established along with necessity, in penal justice, of
having a body that that could be marked by punishment, and in matrimonial law, of having a body that
could be marked with a price in transactions among collectives. From birth to mourning after death, law
“takes hold of” bodies in order to make them its text. Through all sorts of initiations (in rituals, at school
etc.), it transforms them into tables of the law, into living tableaux of rules and customs, into actors in the
drama organised by a social order.
Michel De Certeau

Living beings are transformed into signifiers that embody rules and regulations. The skin is the
parchment on which authority’s hand writes. De Certeau illustrates this idea by quoting from
Shakespeare’s Comedy of Errors, where Dromio the slave says to his master

“if the skin were parchment and the blows you gave were ink”.

Here, the relationship between domination, repression and writing is expressed, where the law is inscribed
'on the back of its subjects’, where bodies are books and skin becomes paper.

In Rituals, Mayhew effectively sheds identity in order to sidestep a kind of ‘intextuation’ that aims to
colonise, control and commodify the body. Here, the body becomes a text to be shared; where written
words constitute the narratives of a lost ‘other’. Through the act of collation, reading, writing and
rewriting, these memories of erasure once again emerge into a symbolic order that has neither author
nor owner. The text is autonomous; it describes a psychic utterance while Mayhew’s flesh becomes
merely surface without depth, where identity and being dissolve as the body is stripped down, emptied
and extracted. A spirit inhabits the remaining void, conveying new messages and carrying fresh signs.
Link to Images