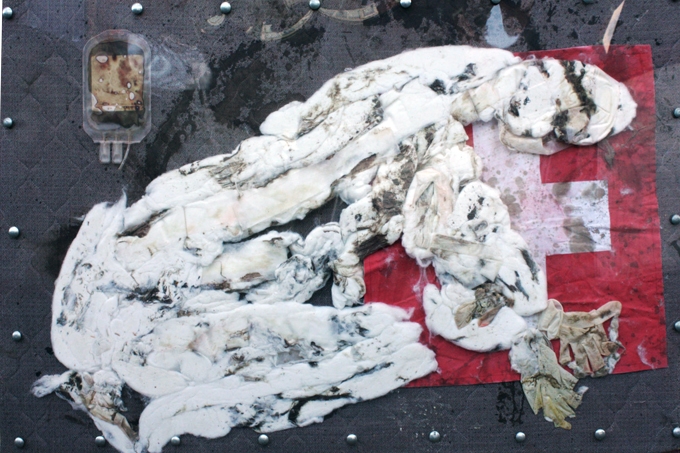 Performance is identified as ephemeral, momentarily in its make-up, often performed “for one Night Only” a “One Off.”

“You just had to be there” is often the tag line that is uttered as announcement to those who had missed out on ‘being there’ as a first hand witness.

I am rarely a witness I’m often the perpetrator, the activist being witnessed in acts of momentary living.

The annuals of witnesses and documentors accounts is a growth industry, there are probably more witnesses than perpetrators and the perpetrators are gagging to be written about, to be realised, to be immortalised in academic jingo, to be stitched and bound in doctorates and hard back illustrated books, that stack the cyber shelves of Amazon.com.

Or perhaps they are love letters of loss, longing & desire.

Perhaps they are post cards of ‘wish you were here’.

Perhaps they are stories that never would happen.

Perhaps they are words of transportation.

Perhaps they are recipes to assist in the making of beautiful meals.

Perhaps they act as birth certificates to actualise and recognise existence.

Perhaps they are guides through impossible terrains.

Perhaps they are sermons of the unimaginable imagined.

Perhaps they help us to understand.

Perhaps they are manuals for how to remember.

We need to remember.

How do we remember?

What remains but memory translated into words to be re-consumed by eyes and brains?

For tongues to flicker spittle across faces in acts of lectured baptisms of performance faith.

The witness off loads and scribes their accounts, framing the actuality of performance action into another language of “text” that go someway to adding texture to the reality of that which was missed.

What remains for the artist?

I love re-visiting the scene of performance crimes.

I often have to return to re-find, re-locate myself following the complete loss of being that often follows these
adventures into performance.

I can hear you breathing gently in the dark
It is for me the most intimate moment of love war and peace
From where I’m standing we’re all in it together.

I have to return

There is an accumulation of sequences, an orchestration of rhythms, the compositional moments and choreographic instrumentation of fragments made into a whole in order to arrive at the point of

Shaping space with a sequence of actions that matter.

It is a form of organic structural construction.

An existence within a multi-dimensional moment out of time

An impossible dance weaved in the silence of the hours before “It’s Show Time”.

Listening to the Beat Beat Boom Boom of every shard of fragmentary moments.

It is for me a “fucking hit”

Dropped
submersion in the heaviest of lost.

A blurring of a vague nothing,


How far will you go to keep living?

To remember the muscle memory of exquisite pain buried deep.

‘At times, Mayhew’s work feels like the ‘growing pains’ of a seemingly
liberated generation for whom a sense of personal identity and integrity remained elusive.
What makes his witness of inner turmoil so poignant and powerful is that he
doesn’t opt for an exclusive introspection:
Mayhew’s journey towards self-knowledge encompasses far-ranging
confrontations with social mores at home and abroad –
he puts his emotions and his body on the line in order to challenge complacency and hypocrisy.’
Mary Brennan

There is only now

tomorrow is a frivolous unbalanced point of hope.

There is only now

A blurring of a vague kind of nothing

I wasn’t there
I was there
Elswhere
There – suspended in a series of sequences of hope and communication.
here
It is a breathless form of existence >

Gagging on the air that rushes into your lungs
It’s a form of suffocation
Too much life to swallow
Is there such a thing?

The intelligence of the artist does not build walls to support an argument.

There is no argument.
There is nothing to argue about.
It has all gone into the invisibility of vapour.

The intelligence of the artist does not construct false securities, false positions, or false propositions or a false Babel.

The evidence of something happening is in the remains.

Evidence of a performance crime

Where is the artist?

Found in the evidence of performance

‘art’ as place is filled with boxes of

that I have been unpacking > searching through > seeing >

Possibly clinging onto as evidence of an existence I was consciously lost in.

The pre performance time is conscious

It is beautiful
An articulation of the invisible silence that emanate from people, space
and place that enter into a sequence of performance locational patterns, maps, lists, and sequences.

Where is the artist?

In a presence of “here and now and gone tomorrow”.

In my case a lot of blood soaked items, bottles of piss and shit, clothes saturated in something that was living warm identity.

The Body as fragments

Following the immaculate precision of imagining what could happen

Let go of social breeding and survive in the breathing patterns of instinct.

Picking up the pieces to see where I am, where I have been is found in the composition of objects that remain > These are documents of actuality, moments of time framed to generate a poetic performance response to performance art.