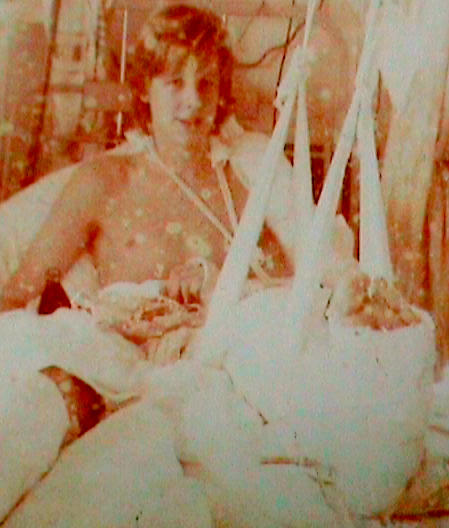 1979 following a fall down Kinder Down Fall, Peak District.
His unique views on the world regularly open the eyes of his partners and audiences to what is possible.’
(Liz O'Neill – Director, Zion Arts)
​ 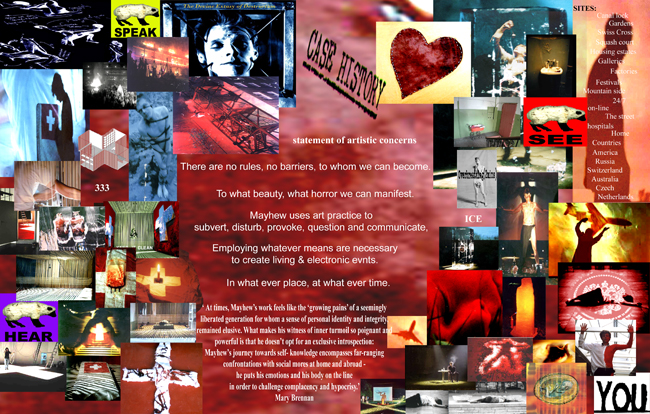 1982-5             Dartington College of Arts.
Followed by a one-year residency at Rotherhithe Theatre Workshop

(by invitation from Dartington) in order to develop ideas within a  participatory community and site specific context.


·       My qualifications lie in a 25+ year track record as an artist, working on an international level.


·       My work is highly-regarded nationally and internationally, and has been incorporated into the British Council Performance in Profile.


·       I am cited as ‘one of the most original and searching artists currently working in the UK’. (John E McGrath – Artistic Director, National Theatre of Wales)

·       I have been regularly funded by Arts Council England on a project-to-project basis as well as being a client of ACE.

·       I have been funded by local and district agencies throughout my career as well as acquiring funding from International sources.

‘Michael cannot fail to make a significant impact on any environment where he takes and makes his work. His working process is considered, researched and engaged with on a level that is hard to match. His unique views on the world regularly open the eyes of his partners and audiences to what is possible.’
(Liz O'Neill – Director, Zion Arts)

·      Away in a Manger – 8-hour durational performance at Plymouth University.

·      Curated The Allery Gallery – a community based event, including a  large-scale pop-up gallery engaging with 50 artists from across Manchester.

·      Performance in Cavan, Ireland, as part of Inter-art, Cavan – a national and international contemporary art festival.

·       Commission of Hyper-Graphic Score for Alderbrugh Music Festival, played by House of Bedlam, as part of an educational programme.

·       Presented ‘there is no title’ at Liverpool Biennial as part of an evening with Mercy.

·       Residency Blackwell Book store to produce Surgery of Dreams - a celebration of books – by generating a collection of books as objects.

·       Commissioned by The London Sinfonietta to compose a graphic score for solo piano.

·       Presentation of ‘away in a manger’. Solo performance using the materials Blood, Oil, Straw, Text and Bird Song, performed at Performance Space, London.

·       Residency & Commission: Australia: White Line and Beyond the Dust – Following an extensive journey over land from Perth to Brisbane on a search for a sister never met, I created two performances at the Exist in ’08 festival. The journey was documented using sound and video recordings, and I collected sand and objects found on my route. Funded by an Arts Admin Bursary, and Queensland Government.

·       Commission: Y X Collection  - a commission from Contemporary Arts Society and Beck’s beer for Beck’s Fusions (music and art festival in Manchester). Nine-piece collection of human-scale sculptures based on the human chromosome. The objects were covered in silver sequins and flown over the crowd during a performance by Hercules & Love Affair.

·       Commission: Manchester International Festival: The Gathering – A large-scale participatory event set in Manchester Town Hall where I was the lead artist working in collaboration with 16 artists from different disciplines/backgrounds. An Installation (fifty members of the public told a story about someone who had vanished from their lives). We looked at the idea of vanishing in terms of landscape as well as people. This was a collaboration based on listening.

·       Rituals of Being Not Being - Artist in Residence at Tulca Live, National University of Ireland, Galway. A development of The Gathering – for ten days I listened to 14 people recount a story of someone who had vanished from their lives. These stories were then taken through a series of rituals.

·       Just Being You– Artist in Residence at Groningen Festival. Mayhew was simply requested to ‘be’ and engage with other human beings being human.

·       Made in China - A peripatetic artist's residency supported by ACE/British Council Artist Links. This project witnessed me travel China for three months with the basic premise to ask if China could make me as it seemingly makes everything else. Worked in several locations from a brick Factory to an abattoir, to the mountains of Northwest China with nomads. The work from this residency has been performed & exhibited in several locations in the UK. Link Film 1 / Film 2

·       Always Forgetting What is Beneath Me - A six-hour durational performance (at IDEA, Salford) arising from my residency in Saint Petersburg Russia. This performance was made with local practitioners, each of whom was asked to freeze something essential to their being inside a metre-square block of ice. The ice was then melted creating sculptural forms.

·       Residency / Commission: Switzerland: 333 - Theatre Arsenique, Lausanne, and Theatre L'Usine, Geneva, Switzerland. Process-based practice responding to the question “Who are we as Swiss?” 333-hour durational performance. I worked in collaboration with two Swiss architects to build and sustain my life in a bespoke structure based on the Swiss Cross, a national iconic symbol of peace, neutrality, cleanness and safety. Further performances resulting from the residency (lasting 3 hours and 33 minutes) at Contact Theatre, in Brisbane & Perth (Australia), and at Le Batie Festival (Geneva, Switzerland).

·       Estimation of Maturity – A retrospective exhibition at Contact Theatre.

·       Artist in Residence at the National Review of Live Art.


·       Residency ~ Greenroom, Manchester: Developed a series of short term projects and participatory workshops. Worked with Rathbones CI, an organisation who work with disaffected school children. Established a men’s workshop entitled ‘poo papa’ explored men’s relationships with their fathers. MENCAP, and a group of people in their 50s and 60s who had been raised in psychiatric wards as children, to create an installation based on the private spaces they never had. This was awarded by MENCAP.

·       The Doctors’ Notes - Participatory workshop using the doctors’ notes of people now dead (notes originally found in the [closed-down] John Moor Hospital, Lancaster). This project researched our changing attitudes to death using the framework of the medical and biographical details written within the doctors’ notes. The Doctors’ Notes was an unrehearsed immediate performance: this was a launch into improvisation heading towards oblivion as I drank two bottles of either Scotch or Vodka, depending on where I was in the world and headed towards the end. Performed in Manchester, Saint Petersburg, Frankfurt am Main, and Glasgow.

·       Established My House & Your House on the site of an old hospital originally built for ‘inebriated woman’ in Clitheroe, Lancashire, with facilities for artists to eat, sleep, and work. Instigated a series of performances, installations, exhibitions, film screenings, community and school participatory projects, and large-scale performances. Funded through Arts Council of England on a client basis & Northwest Arts Board, Lancashire County Council.

·       Dogs of Heaven - Community Participation Project - Artistic Director. Dogs of Heaven became one of Britain’s most renowned community projects. We worked out of the Hulme Housing estate. As director, writer, and pyro-technician I was faced with a location whose community identity was shaped by references to the ghetto, and free-lining outside the mainstream. There were no rules within this concrete labyrinth of walkways, stairs-wells and battlements. Everyone was someone that didn’t want to fit in. Dogs of Heaven promoted collaboration as a key framework for the creation of community happenings and for the transformation and regeneration of perception of an inner-city estate. The Dogs of Heaven project was a model for regeneration through the arts that has been used throughout the UK since.